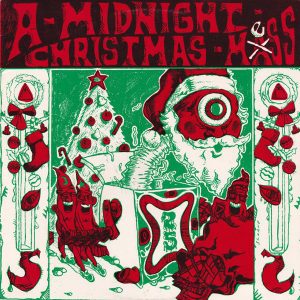 This just might be my favorite Christmas song. Found only on an obscure Christmas compilation from a mid-1980s indie label, The Tryfles “Gloria (In Excelsis DEO)” was both decades ahead of its time and a quintessential  1960s garage-rock jam.

Basically, it’s what you kids would call a “mash-up.” But rather than taking two existing recordings and using computer wizardry to join them together into a somewhat coherent whole, The Tryfles are playing the ancient hymn “Angels We Have Heard on High” (AKA “Gloria”) at the same time as they are playing the modern spiritual “Gloria” by the Irish songwriter poet Van Morrison.

The results are SPECTACULAR.

There is absolutely nothing in the world like hearing “Angels We Have Heard On High” sung by an “angelic” choir over the familiar “Gloria” riff.

And the chorus is even better — a call-and-response between the garagey lead singer and the “angelic” choir.

Naturally, I played the hell out of this on KFSR every Christmas, but was lost for to me for much of the 1990s. Luckily, the internet brought it back into my life a few years ago – a Christmas miracle! – and I’ll be bugging people to hear it until the end of my days.