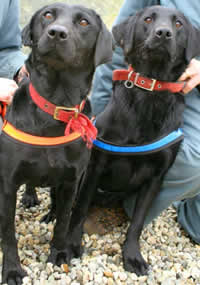 The canine crime fighting duo Flo and Lucky were in the news again this week. The dogs, allegedly trained to sniff out counterfeit DVDs, have just completed an assignment in Malaysia where they are said to have helped uncover over $6 million in bootlegged discs. The pair was so successful that counterfeiters put a bounty on their heads, and the government awarded them medals for “Oustanding Service”.

Perhaps the most amazing aspect of Flo and Lucky’s story is that media outlets have been quick to regurgitate the MPAA’s claims without actually questioning the dogs’ abilities or the program they’re participating in. Take a closer look at the facts and the two start to look more like publicity hounds than police dogs.

As I noted last year when the dogs made their first appearance in the UK, the pair obviously aren’t trained to smell intellectual property violations. An official press release explained that the dogs “were amazingly successful at identifying packages containing DVDs, which were opened and checked by HM Customs’ representatives.” The press release went on to state, “While all were legitimate shipments on the day, our message to anyone thinking about shipping counterfeit DVDs through the FedEx network is simple: you’re going to get caught.”

The message to people shipping legitimate DVDs is also clear. You can expect that your package may be opened and searched for no good reason.