(I Got A) Catholic Block 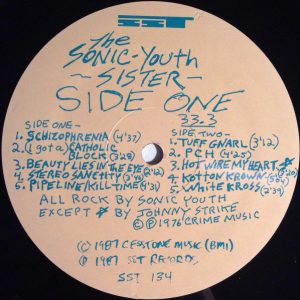 If “Schizophrenia” started Sister off on a relatively calm note, then the mood was totally broken by the next song, Thurston Moore’s “(I Got a) Catholic Block,” which roars out of the gate at a punky speed and has not just what is recognizable as a catchy riff, it’s a riff that matches the melody of the the song, making it for all of us lapsed Catholics to sing along.