I Got You Babe 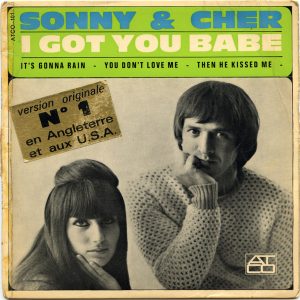 One of the most indelible memories of my childhood was watching The Sonny & Cher Comedy Hour in the early 1970s. And while it’s probably not the first place I heard “I Got You Babe,” which was a AM radio staple, it was where the song got drilled into me, as at the end of every episode, Sonny & Cher would sing it to each other.

In retrospect, they were probably protesting too much, saying “look at us!! we’re a happy couple” when as we all know, the situation on the ground was totally different, as the series ended when they got divorced in 1974 (and then revived as The Sonny & Cher Show in 1976 because $$$$$). Anyways, besides the weekly duet of their biggest song, the only other thing I remember was they debuted an animated video for Jim Croce’s “Bad Bad Leroy Brown” that now seems problematic, to say the least.