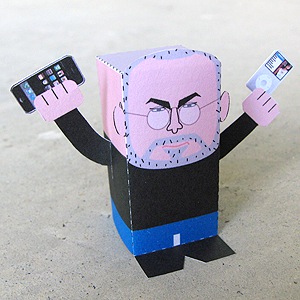 Here’s what I saw: END_OF_DOCUMENT_TOKEN_TO_BE_REPLACED

Well, all I can say is that it’s about godsdammed time. Today’s big news out of Macworld — that the iTunes Music Store is going DRM-free AND adding a tiered pricing structure — is good news for everyone involved.

It’s good news for consumers because — from the consumer standpoint — DRM sucks fully, totally and utterly. No matter how it was spun as one of those “for your protection” things, or as “protection for the artist,” it’s been proven time and time again to be a big pain in the ass for consumers. Anytime you purchase an artifact — including a digital file — with eithervsome kind of purely arbitrary use restriction and/or dependency on the large corporation that sold you the artifact to keep it working, that’s potential trouble. Period.

END_OF_DOCUMENT_TOKEN_TO_BE_REPLACED

As part of my Medialoper reporting duties, I often venture into the real world to get a sense of what’s happening outside the walls of the Internet. I have set up a little lab to study the media consumption habits of ordinary Americans. In order to keep the science almost rigorous, the group I’ve assembled is pretty much random, much like, well, what you’d find in an average office setting.

Since the dawn of the 2006-2007 Fall television season, I’ve had two conversations relating to traditional motion picture viewing. The first was a rather bizarre discussion about Lost. It started out as a review of the season premiere, but, well, died. Somehow it was a rehash of Season One — which, thankfully, I had seen enough of to fake my way through the conversation. Never let it be said that we don’t go the extra mile here.
END_OF_DOCUMENT_TOKEN_TO_BE_REPLACED

Last week we were startled to learn about Zune’s viral DRM system. As it turns out, the whole thing may have been a miscommunication on the part of Microsoft’s Zune Insider. But that doesn’t mean that Zune isn’t responsible for spreading the DRM virus. On the contrary, there’s mounting evidence that Zune is directly responsible for a mutation of the virus.

With the release of Zune, Microsoft has intentionally turned its back on its previous DRM standard – the PlaysForSure system. As a result, PlaysForSure partners are starting to drop support for Microsoft’s old DRM system in favor of their own proprietary DRM systems.

On Monday Real Networks and SanDisk announced that the Rhapsody music service will be switching from PlaysForSure to Real’s own Rhapsody DNA system. In an attempt to emulate Apple’s iTunes/iPod experience, SanDisk will release a new player that will be tightly integrated with the Rhapsody music service. The move is designed to position both companies against the upcoming Zune Marketplace as well as iTunes.

END_OF_DOCUMENT_TOKEN_TO_BE_REPLACED END_OF_DOCUMENT_TOKEN_TO_BE_REPLACED

This is going to be pretty short and sweet. I’m sure that Kirk may have a blow-by-blow analysis of all of Zune’s shortcomings forthcoming, but I just want to do a quick take on what is supposed to make Zune an “iPod Killer:” — that killer app that would coax people like me away from purchasing yet another iPod — the wireless song-sharing.

END_OF_DOCUMENT_TOKEN_TO_BE_REPLACED

Of all of the product announcements made during today’s Apple event, the most surprising, by far, was the pre-announcement of a new set-top box. Code named iTV, the box will use standard wireless networking to feed iTunes content to any home entertainment center. The device is scheduled to come out in the first quarter of 2007.

Does anyone remember the last time Apple pre-announced a new product this far in advance? What happened to the legendary Apple secrecy? A huge part of Apple’s mystic is built around the intense reaction the press has to the unveiling of unexpected new products. That coverage usually drives customers to jump on the bandwagon and buy the latest Apple products immediately. By previewing iTV this far in advance Apple risks losing both the buzz and consumer interest during the months leading up to its release. Worse yet, iTV won’t be available for the holiday shopping season.

END_OF_DOCUMENT_TOKEN_TO_BE_REPLACED

How many times have you asked yourself, “if only my iPod docking station were a robot? And not just any robot, but a robot that will follow me around, playing all of my favorite iPod music?”

If you’re like me, the answer is “dozens, maybe even hundreds, of times.” Well, finally all of your hopes have been fulfilled and all of your prayers have been answered.

I’m going to call it the iPodBot, but its real name is the Miuro, and it is going to be your newest — and bestest — robot friend!

END_OF_DOCUMENT_TOKEN_TO_BE_REPLACED

A long time ago in a galaxy far away, we had a little something called “AM Radio”. On AM Radio, they played something called “singles”. These singles were sometimes just that — individual songs recorded by artists. Sometimes these singles came from a flat piece of grooved vinyl called an “album”.

This being the the olden days (think approximately the time that the wonders of electricity were fully explored), sometimes you’d hear a single on the radio and you’d go to the store and buy it. The single generally had two songs, on on the A side and one on the B side. Some people took the whole power of the purchasing dollar thing further and bought entire albums.