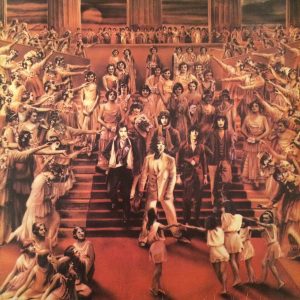 It’s Only Rock ‘n’ Roll is definitely the worst record of the Rolling Stones decadent phase, which runs roughly from 1973-1981. With genius producer Jimmy Miller succumbing to his own drugs issues (kids, don’t try to keep up with Keith Richards, it’s never gonna work), It’s Only Rock ‘n’ Roll was the first album produced by Mick & Keith (as the Glimmer Twins, natch), it it showd. Filled with long meandering songs, tentative forays into funk and reggae and guitar tones that I really dislike (cf. “Dance Little Sister” or “If You Can’t Rock Me”), its only real redemption is the two singles: a pretty decent take on The Temptations “Ain’t Too Proud To Beg” and the title track, which was recorded in completely different circumstances from the rest of the record.

“It’s Only Rock ‘n’ Roll (But I Like It)” was recorded in Ron Wood’s home during the sessions for Wood’s first solo album, two years before he joined the Stones for their 1975 tour. Wood should probably get a bigger credit than the “inspired by,” but if they weren’t going to give Mick Taylor a songwriting credit for “Winter” or “Moonlight Mile,” there really wasn’t a chance Wood was going to get one.