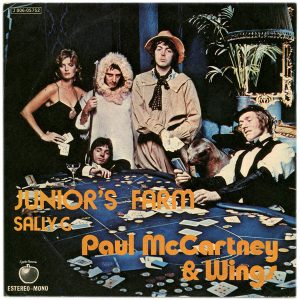 From the second half of 1973 though the end of 1974, Paul McCartney & Wings put out five straight rockin’ singles: “Live and Let Die,” “Helen Wheels,” “Jet,” “Band on the Run,” and the rockin-ist of them all, the now criminally neglected “Junior’s Farm.”

I say “criminally neglected,” because “Junior’s Farm” has neither had the Bond connection nor a parent album, and it has only shown up on a couple of his compilation albums and exactly zero of his live albums — not even fucking Wings Over America — despite seemingly being tailor-made for live performance.