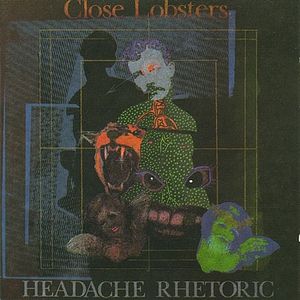 One of the great thing about the 1980s was that if I got into an artist late into their first album cycle, I’d often get inundated with new music from that artist just as I’d digested their debut. And so it was for me as Close Lobsters tossed two albums and an EP into my life — all of which I loved — in the space of little over a year.

After all, yearly releases weren’t an anomaly in the 1980s, but rather an expectation.

Then they broke up, of course, leading me to obsess over what they’d already done and mourn what they’d never do. Especially since their second record, Headache Rhetoric, was tougher and darker than Foxheads Stalk This Land. And while it wasn’t quite as consistent, Headache Rhetoric sported a couple of songs that I absolutely cherish: “Nature Thing” and one of my absolute favorite songs of the 1980s, “Knee Trembler.”