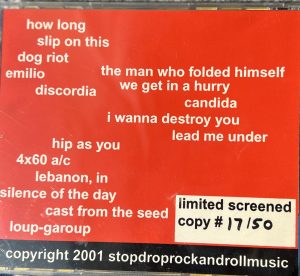 The first thing you should probably know about the very early Who-like “Lebanon, IN” was that Victor Sotelo has never been to Lebanon, Indiana.

What happened was that Victor was working at B.Dalton’s — a mom-and-pop killing bookstore chain that was itself killed by Barnes & Noble which was then killed by Amazon — when the melody for the song popped into the head. And because it was a long melody, he needed to write some words it stat, and since many of the books that that B.Dalton’s received were from Lebanon, Indiana, he wrote a temporary opening line — “This song’s for “Lebanon, Indiana” — in order to remember the song so he could eventually write a real lyric.