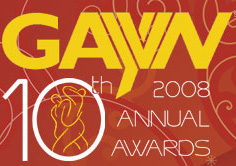 We’ve got health insurance and mysterious 401K paperwork and a sign above the kitchen sink asking people to please wash their damn dishes and cliques and birthday cards passed around and we go on the occasional “team-building” outdoor excursion or out for lunch around the holidays. Except, you know, our raison d’etre is pornography, so we can use dirty words in office emails and it’s perfectly okay to put up pictures of naked hunks if one is so inclined. Best of both worlds.

(Sidenote: my new favorite adjective is “hunky.” It’s often used in movie blurbs, as well as episode synopses for our webcast The Tim & Roma Show, i.e. “Tim and Roma are joined by hunky Jason Adonis…” I have no idea why, but it makes me laugh every single time.)

Sometimes we need to de-porn the office for a sensitive visitor (like one of our “straight” web design clients, or the boss’s nephew), and even though the relaxed corporate culture allows me to decorate my workspace like the gloomy, media-saturated teenager I’ve never stopped being, there’s no nudity on my walls. Three (count ’em, three) Marilyn Manson posters, sure, magazine covers from Bizarre and Fetish and Skin Two as well as one-sheet movie posters for both Twin Peaks Fire Walk With Me and Cronenberg’s Crash, both of which are among the most sexually outré films of the nineties, but no porn. Because, really, that would just be tacky.

Melissa’s actual day job is writing for Valleywag, and in addition to Medialoper I write for the Eros Zine (or at least I did, until it folded this week). Our post-modern ironic-yet-sex-positive credentials were solid. Granted, to get in the door all that mattered was that we had our tickets in hand. Like David Cross said, indie hipster cred won’t buy you a house in the country, and at a hundred bucks for regular tickets (and two hundred for my “industry” ticket), we wouldn’t have been there if our bill wasn’t footed.

END_OF_DOCUMENT_TOKEN_TO_BE_REPLACED

We admit it freely: sometimes we can’t help the snarkiness. It just comes out. For example, let us return to this gem from ”The Daily Loper – February 7”:

Headline: Wal-Mart entry to video downloads a â€˜game changer’
Us: Yeahhhhhh . . . no.

Like most of you, we read the Reuters piece — classic journalism filled with breathless anticipation and so-far-off-base-it’s-funny commentary from media experts — with a dose of skepticism. Despite the fact that Wal-Mart has a strong brand name, we simply could not fathom how the Wal-Mart product could change the game. In fact, our analysis of the service suggested quite the opposite. Still, Memory Lane is a fun place, so let’s look back at a fun comment:
END_OF_DOCUMENT_TOKEN_TO_BE_REPLACED

Ah, we have another one for the nostalgia file: the return of Wall Street to Hollywood. Back in the day — when home video was still seen as a risky business — tax law favored investment in movies. A lot of doctors and dentists bought shares in partnerships that invested heavily in the movies. Sure, there were some money-makers, but, as the doctors and dentist learned, sometimes you have to finance a lot of duds before you get to a real winner.

Now the investors are back and more eager than ever to get them some of that Hollywood glitter. In the deals of old, the investors partnered with the studio, sharing the risk based on overall dollars put into the production. The upshot was that there was a solid system behind the movie-making process. You know, studios, sound stages, payroll departments, marketing teams. The downside was that a lot of bad movies were made in the 80s. These days, in an attempt to “bypass” the studios, investors are making deals with producers directly.
END_OF_DOCUMENT_TOKEN_TO_BE_REPLACED

Of all of the product announcements made during today’s Apple event, the most surprising, by far, was the pre-announcement of a new set-top box. Code named iTV, the box will use standard wireless networking to feed iTunes content to any home entertainment center. The device is scheduled to come out in the first quarter of 2007.

Does anyone remember the last time Apple pre-announced a new product this far in advance? What happened to the legendary Apple secrecy? A huge part of Apple’s mystic is built around the intense reaction the press has to the unveiling of unexpected new products. That coverage usually drives customers to jump on the bandwagon and buy the latest Apple products immediately. By previewing iTV this far in advance Apple risks losing both the buzz and consumer interest during the months leading up to its release. Worse yet, iTV won’t be available for the holiday shopping season.

END_OF_DOCUMENT_TOKEN_TO_BE_REPLACED

Kirk’s debunking of the Amazon myths briefly discussed the prices and restrictions being imposed on consumers who use this service. Simply put, it ain’t good for the customer.

Which, I suppose, will ultimately be bad for the studios.

Amazon has perversely chosen to ignore consumers wants and needs in an effort to bow to studio concerns about piracy. The result is prices that reflect the last century — apropos, as it was pointed out that the suggested technology for linking to your television gives you a picture straight out of 1995.

END_OF_DOCUMENT_TOKEN_TO_BE_REPLACED

Last week Amazon launched Unbox, its long rumored video download service. In the days since its unveiling Unbox has attracted a storm of media coverage – a surprising amount of which has been misinformed and misleading. As a service to Medialoper’s readers, we will now attempt to debunk a few of the most persistent myths surrounding Amazon Unbox:

END_OF_DOCUMENT_TOKEN_TO_BE_REPLACED

So what role should film (music, book, architecture, etc) critics play in the real world? In response to a question from colleague Patrick Goldstein, there is this:

END_OF_DOCUMENT_TOKEN_TO_BE_REPLACED

Both the motion picture industry and publishing industry have been scrambling to go mobile*. Mobile, they believe, will save the world. And I think they’re partially right. Mobile will be one of the possible choices viewers have — but it can’t and won’t be the only option. If Medialoper has a religion, it is the doctrine of choice.

I’ve been following the Los Angeles Times series on today’s kids and their attitudes toward new media with more avidity than most — it is, after all, my job. And I’m not surprised to learn the two key reasons for slow adoption of the cell phone motion picture experience:

END_OF_DOCUMENT_TOKEN_TO_BE_REPLACED

In a weird sort of sleight of hand, media analysts reviewing Chris Anderson’s The Long Tail focus on the example of Netflix as both embodiment of the theory and refutation of the impact of long tail revenues. As the Wall Street Journal noted:

The currently popular notion that hits are becoming less important due to the vast reach of cyberspace would strike most Hollywood executives as preposterous. For good or bad, moguls make the opposite assumption. They can be forgiven for doing so; after just three weeks of release, the Pirates of the Caribbean sequel is already Hollywood’s all-time 11th biggest grosser, and No. 63 when adjusted for inflation.

END_OF_DOCUMENT_TOKEN_TO_BE_REPLACED

The Boy Scouts of Hong Kong are at it again. Last year they began awarding merit badges for copyright proficiency, and now they’ve enlisted their entire membership to scour the web for signs of piracy. Nothing says summer fun for kids like firing up the laptop and searching the internet for intellectual property violations.

It’s not just the Boy Scouts either. According to the New York Times 200,000 children Youth Ambassadors, will be actively involved in the program.