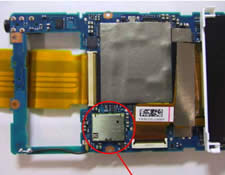 It’s been just over a month since Microsoft announced the mysterious Zune product line. The company has intentionally kept the Zune shrouded in secrecy in hopes that a viral buzz will build prior to the official product release. With almost nothing of substance to report Microsoft’s own Zune Insider seems to spend most of his time denying “rumor and speculation”.

Given all of the secrecy surrounding Zune it’s really surprising to see Zune’s guts spilled out all over the FCC’s website.