Save It For Later

Throughout their entire career — though, naturally, more earlier than later — The Miss Alans sprinkled in a few covers during their live shows.

Obviously, doing covers is a really fun thing for a band that relies upon original material: you can break up your set with a somebody else’s song that shows where you’re coming from. Or maybe learn something for a special occasion, like Halloween or St. Patrick’s Day, for which The Miss Alans once played “And The Band Played Waltzing Matilda” at the Blue, with Jay on banjo. I don’t remember that at all, so it must have been a really good St. Patrick’s Day.

Then during the period where they were in L.A. trying to get a record deal and only had a single set of material worked up for the showcase gigs Kirk was getting them, they did an entire set of Neil Young covers — all of the usual suspects, which they then turned into long jams — which reminds me of something, but I can’t quite put my finger on it.

END_OF_DOCUMENT_TOKEN_TO_BE_REPLACED 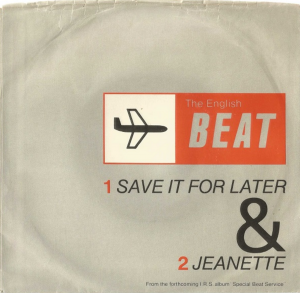 It’s so simple. It’s so complex. It’s so straightforward. It’s so transcendent. It’s pretty much everything a great pop song should be wrapped up into a single package. Riffs, harmonies, hooks, beats, words. It’s all there.