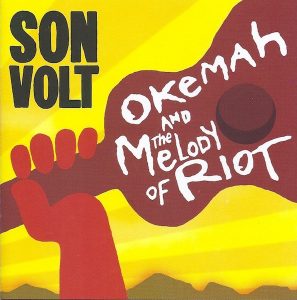 Album: Okemah and The Melody of Riot
Year: 2005

And so, after Wide Swing Tremelo, Jay Farrar broke up the initial version of Son Volt and embarked on a solo career, producing two studio albums — 2001’s Sebastopol and 2003’s Terroir Blues, plus a film soundtrack, two live albums, and two compilation albums: one for Son Volt and one for Uncle Tupelo. The only one I truly enjoyed was 2003’s Uncle Tupelo compilation, and I didn’t even enjoy that as much as I enjoyed the Uncle Tupelo reissues that also came alongside it.

That said, I wonder if it was the act of compiling the Son Volt record that got Jay Farrar to reunite them. Well, not so much reunite, but reconfigure, as nobody from the original crew came back. The most cynical take was that “Son Volt” had more brand juice behind it, but it’s possible that Farrar just liked leading a band. And in the subsequent 17 years, the line-up has changed, but some of the same names keep joining him. Okemah and the Melody of Riot was probably Farrar’s best album since Trace, and it set up a pattern that has held ever since: Son Volt would release a record that sounded basically like the other ones, and I’d (sometimes eventually) would listen to it, and every few albums, he’d put out a song that totally killed me.