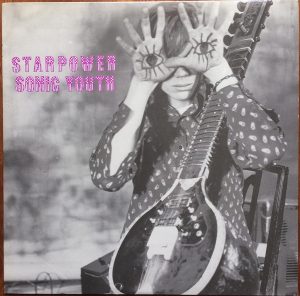 I’d been either ignoring or disliking Sonic Youth for four years when they came out with 1986’s EVOL, which confused the shit out of me because it suddenly had some songs that were, well, kinda sorta songs, I guess.

Prior to that, when I dropped the needle at KFSR looking for something to play from their 1982 self-titled debut, 1983’s Confusion is Sex or 1985’s Bad Moon Rising, it just all sounded like self-indulgent noise. Though I will admit Bad Moon Rising did have one of the greatest album covers ever. It just all reminded me of all of those other bands with fantastic names — I still think that. Blind Idiot God is the single greatest band name ever — and unlistenable music.