Part Two: The Role of The Curator, Or Why Disk Jockeys Could Be More Relevant Than Ever

New services (like, oh, Medialoper) are designed to help consumers sift through the mass of media being thrown their way. In the past, disk jockeys served as curators of music. In today’s world, the increased level of programming makes the curator process even more important. This means aligning consumers with trusted sources of information. A trust relationship develops between the two parties — without that trust — in taste, quality, integrity — the consumer goes away.

END_OF_DOCUMENT_TOKEN_TO_BE_REPLACED

You’d be hard pressed to find a more digital savvy group of people than the ones who attend SXSW Interactive. The vast majority of conference attendees are armed with laptops and logged onto the ubiquitous wireless available throughout the City of Austin. Most of the attendees have at least one blog that they post to on a regular basis (I think the average is actually 2.32 blogs per attendee, but I’m having trouble fact checking that number). It’s like an army of field reporters have descended on a conference to provide coverage from every possible angle.

Don’t believe me? Check out:

All of this just makes the fact that there is still a SXSW Press Room seem that much more archaic. What the hell happens in that room? Seriously, what sort of special accommodations could “real” reporters need that aren’t already available to every attendee?
I’ve racked my brain on this one and the only things I can come up with are:

On the last day of the 2005 conference renowned CSS Guru Eric Meyer was called to task for daring to take photos of his friends without proper press credentials. I guess security hadn’t notice the 9,000+ session photos uploaded to flicker over the previous four days. Meyer played along and was ultimately granted a press pass for his camera. Apparently media credentials are now just a bureaucratic formality.

Meanwhile, the SXSW Press Room lives on, like some kind of vestigial organ completely out of place in the 21st century.

Part One: The Music Industry Doesn’t Have A Clue, And The Government Isn’t Helping Either

Remember when it was just video killing the radio star? Today, it’s the Internet and satellite and the iPod and, let’s be frank, general boredom with the medium. Does radio have a future in a digital world?

This was the topic of a SXSW panel called “The Future of Radio” (perhaps it’s a sign of the times that the podcast doesn’t seem to be online yet, but the video is — link below). Panelists included moderator Kevin Smokler, Celia Hirschman of Downtown Marketing and KCRW, Roman Mars of WBEZ, Elise Nordling host of Indie Pop Rocks from SomaFM, and Tim Westergren of Pandora, bringing together lifelong radio listeners, public radio professionals, Internet radio stars, and purveyors of social networking applications.

Before the session started, I eavesdropped on a conversation between two long-time radio professionals. At one point, the man said, “I’m very, very interested in podcasting.” And I’m thinking, “So you should be, so you should be.”Â

END_OF_DOCUMENT_TOKEN_TO_BE_REPLACED

I admit it – when I heard that the MPAA was sending someone to SXSW to sit on the “The Future of Darknets: Can Hollywood See The Light?”, my first thought was, “That’s gonna be fun.” You know, fun in the way that root canals happening to someone else are fun. Fun, fun, fun.

And it was. I have a sick sense of humor that way. As Kevin Smokler said the next day, “There’s a street fight a-brewin'”.

Let me set the scene: the panel was hosted by J.D. Lasica, author of Darknet: Hollywood’s War Against The Digital Generation. Panelists included Kori Bernards of the MPAA, Mark Ishikawa from BayTSP, Ian Clarke, creator of Freenet, Heather Champs from Flickr (who was mad as hell about the DMCA, a perfect mood for the panel), and Dave Toole of Outthink. Oh, and a room packed with tech geeks, media consumers, and filmmakers. These groups were not mutually exclusive.

END_OF_DOCUMENT_TOKEN_TO_BE_REPLACED 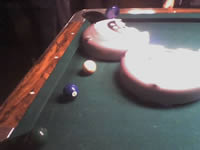 This year’s SXSWi festival is filled with several micro-themes, one, of course, being the idea of remixability. Today’s tech people don’t see entertainment as a static concept. They’re moving ahead as if this is a generally accepted principle — as always, it’s up for to the rest of the world to leap on the bandwagon (and they always do).

Leaping boldly into the void is Smithsonian’s Cooper-Hewitt National Design Museum. In creating an online design museum, the institution is embracing Web 2.0 and making art accessible to the public in a new and exciting way. The relaunched website will allow visitors to create virtual collections, act as their own curators, even help museum staff by adding to the institution’s knowledge-base. In other words, the museum realizes that the dialogue doesn’t have to go just one way.

Among the models that [Kevin] Farnham and Maeda point to are Yahoo’s My Web 2.0 and the site http://del.icio.us. Users on those sites already are creating communities through “tagging” — Web-speak for linking personal reactions to items on a site. Tags allow spontaneous communities of strangers to share interests in seemingly random ways.

The Washington Post rightly wonders if museum culture can survive radical upheaval — museum websites are traditionally staid and as likely to entice browsing as a brochure for teeth whitening. And if a museum’s website can’t engage people, what hope does the museum have?

It’s not wrong to wonder how a Smithsonian museum can survive as the Wikipedia of design culture. Or whether a museum site modeled after the populist photo-sharing http://Flickr.com — with favorite artifacts and amateur points of view — would diminish an institution’s reputation. The bigger question for all museums is how to flourish if they don’t.

It’s almost hard for me to fathom now, but there was a time in my life when I owned over 5,000 albums. My record collection took up most of my living space for many years. My eventual transition to CD narrowed that number considerably, to just under 1,000 albums. Now that I’ve made the transition to digital music I have access to 17,000+ songs on a network attached storage unit, and there’s almost no evidence of my music collection anywhere in the house.

The paradox of digital music is that while listeners are now exposed to a larger quantity of music than ever before, there are very few physical artifacts associated music anymore. The iPod has become the primary tactile interface that music lovers use to select and listen to music. Visual design is less important than ever, and liner notes have practically vanished.

As Gray McCord of M3 design noted during the Smaller, Faster, Lighter session at day 2 of SXSW:

The experience of music has been reduced to a data management activity.

McCord is working on a concept for a new type of music packaging that could be used to represent digital music in a physical world. The concept looks like a cross between a traditional LP cover and a book. With plenty of room for art, liner notes, lyrics, and more, the packaging could restore a vital part of the popular music experience that has gone missing in the iTunes era.

McCord noted that several ways that the packaging might benefit the music industry:

Or the RIAA could just go about business as usual and pretend that nothing has changed since 1956.

Unfortunately, if I were a betting man I’d have to put my money on the later.

You want a hot discussion? Put librarians, Microsoft, Google, and Bob Stein from the Institute for the Future of the Book on a SXSW panel to talk about issues surrounding book digitization (and call the panel “Revenge of the Librarians”). An hour wasn’t nearly long enough for the conversation – and the diverse audience proved that the issues surrounding digitization aren’t limited to a small segment of the population.

Starting with the ideas of what happens after books are digitized and what the impact of a shrinking pool of knowledge might be, the panel started by discussing the elephant in the room (let me say that it was refreshing to see open back-and-forth dialogue between the panelists, unlike the normal nicey-nice stuff you see): Google’s book-related programs — Microsoft’s project isn’t online yet, so escaped detailed scrutiny. Dan Clancy, of Google, explained the various components of the initiative.

The goal for Google and Microsoft (other than making money, and that’s what corporations do) is to build indexes of authoritative works that will provide resources during search. To do this effectively, they need to have a lot of books digitized. This is an expensive and time-consuming process.

END_OF_DOCUMENT_TOKEN_TO_BE_REPLACED

David Pescovitz, of Boing Boing, lead the panel off by noting that he doesn’t really know what digital convergence is. On further reflection he’s pretty sure there is no such thing as convergence, but only divergence. When technologies converge they tend to produce sub-standard products – like the all-in-one uber-pda’s that don’t do any one thing particularly well.

Happily, David-Michel Davies jumped in to make the point we’ve been harping on for a while now — there’s a difference between digital convergence and convergent media.

Some more random notes in no particular order (since that’s what semi-live blogging is all about):

They used to say, “on the internet no one knows you’re a dog”. Today, everyone is branding themselves as a special breed of dog.

Yes, these notes are somewhat incomplete, but I’m recovering from my first celebrity sighting of the day – DA Pennebaker.

Members of Team Loper have just arrived in Austin, TX for SXSX Interactive. As a result, posting on Medialoper may be someone sporadic over the next week. On the other hand, we may just get the urge to live-blog every session. You just never know.

If you happen to see someone wearing a Medialoper t-shirt, you can be sure it’s one of us. Feel free to introduce yourself and please don’t hesitate to buy us a drink.