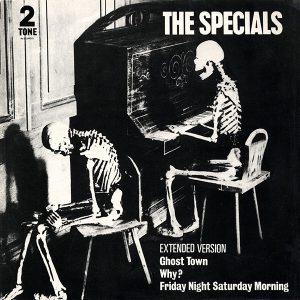 The final single from the the classic incarnation of The Specials was also the greatest song that any of these musicians will ever be involved in, as “Ghost Town” — especially in its extended version — is an absolutely titanic classic that still sounds fucking amazing four decades later.

Written by keyboardist Jerry Dammers, “Ghost Town” evokes just how fucked-up things were in the U.K. during the early days Thatcherism, as unemployment, despair and violence so permeated the landscape, Dammers didn’t even have to go on and on about it in the same way that, say, Joe Strummer or Paul Weller did.