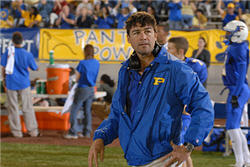 Last year, I wrote about how NBC and DirecTV combined forces to keep the great Friday Night Lights on the air.

It was an experiment, to be sure, and at the time I was worried that the numbers might be hurt because people would either wait for the DVD and/or bittorrent the DirecTV episodes while ignoring the NBC broadcasts.

While I think that people did both, the numbers were strong enough that the showed got renewed not for one, but two more seasons. Awesome! And with the DVD of the third season coming out in May, there was time to watch all three seasons all over again before the next one started on DirectTV.

Which, BTW, would be worth it, because the third season was a complete rebound, washing away the taste of some of the more dubious things that went on in the second season. If you were a fan of Friday Night Lights, everything looked great.

For about a week, that is. Despite the fact that they’ll take DirecTV’s money to produce the show and our money for the DVDs, NBC obviously hates Friday Night Lights. Or more accurately, it hates the fans of Friday Night Lights. Why do I say that? According to a recent TV Shows on DVD post the third season DVD is going to contain bastardized, shorter versions of the episodes.

END_OF_DOCUMENT_TOKEN_TO_BE_REPLACED

A few months ago, I wrote a pretty vicious post describing the awful, user-unfriendly makeover that Bravo had foisted on Television Without Pity.

Part of the reason for the viciousness was that TWoP was a site that, only a couple of years ago, I had declared as maybe my favorite website ever.

Of course, two years is a very long long time, especially on the net. Still, when I wrote my declaration of love, TWOP had been kicking ass for a lot longer than that, and there was no reason to believe that by the middle of 2008, they would be bought by Bravo; the original founders would leave and it would be transformed from a site that I visited several times a day to a site that I now don’t visit for weeks at a time.

It’s a long way for such an established site to fall in a relatively short period of time, and apparently, I’m not the only person who has noticed: ever since the original post, there has been a steady stream of traffic to it, and commenters on it.

END_OF_DOCUMENT_TOKEN_TO_BE_REPLACED

One of the biggest pieces of news about digital music last week was that Universal Music was going to deign to sell their music without DRM. This is, of course, a good thing for consumers, especially in a week where Google Video’s wholesale abandonment of their service showed just how fracked-up DRM schemes actually are.

The other big news in Universal’s announcement is, of course, that they aren’t going through iTunes to sell the DRM-free music, despite the reported success of EMI’s non-DRM’d tunes. This is widely seen as the latest dick-wave in an ongoing pissing contest between Universal and Ap–

END_OF_DOCUMENT_TOKEN_TO_BE_REPLACED

In the past several months, YouTube has gone from “wha?” to something mainstream enough to be the source of Jay Leno bits. The mainstreaming of YouTube has been formalized by the deal they struck with Warner Music, the first of no doubt several they will be striking with the music labels, despite the bluster from Universal.

Of course, they only faced two choices: go legit or go the Napster route. They went legit, and I get that. We all know what happened to Napster when they fought the power. And yet, I wonder if this means that YouTube has peaked in terms of cultural influence.