The music geek in me – the guy who does research on every song he posts – wants you to know that this song predates 1965’s A Charlie Brown Christmas, having been released in 1964 on a record called Jazz Impressions of A Boy Named Charlie Brown.

Not to mention that “Linus and Lucy” has showed up in several other “Peanuts” special and is probably known more as “The Charlie Brown Theme” than its actual title. (So it’s like the “Baba O’Riley” of the “Peanuts” universe.)

And finally, musically, “Linus and Lucy” has absolutely nothing to do with any kind of Christmas-oriented music in any way, shape or form. It’s straight up piano J-A-Z-Z jazz, with maybe a bit of bossanova underneath Guaraldi’s first solo.

However, the music lover in me – the guy who lives (barely) in the real world – knows that none of that matters. As far as the real world is concerned “Linus and Lucy” has been forever transmogrified into Christmas music. Over the years, it’s even come to overshadow the obvious single “Christmas Time is Here Again"  (which, ironically, became the music underpinning a running joke about sadness on Arrested Development.)

Oh, and it’s my firm belief that that bluesy stop-time part that happens 35 seconds in (and never again in the actual song) is quite possibly the most beloved musical moment in all of history. Tough luck, Beethoven and The Beatles. 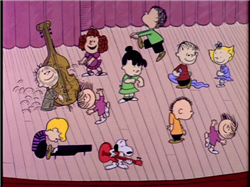