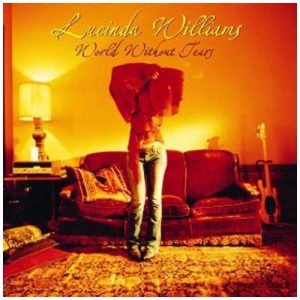 But, like a lot of the songs on World Without Tears, “People Talkin'” brings the pain in the lyrics, as Lucinda describes a relationship under siege.

END_OF_DOCUMENT_TOKEN_TO_BE_REPLACED

Her album release cadence picking up as she got deeper into her career, Lucinda Williams followed up Car Wheels on a Gravel Road in 2001 with the too-quiet-by-half Essence, and then bounced back with 2003’s World Without Tears.

Only two years later! And it kinda showed, as World Without Tears featured some of her most imperfect, raggedly songs. Which, naturally, I loved. As if I could ever dislike a song inspired by Paul Westerberg called “Real-Life Bleeding Fingers and Broken Guitar Strings.”