On Black Friday, the incongruously named day-after-Thanksgiving I rang up Amazon.com and joined the middle class. Yes, I plunked down $1999 for a Samsung LNT4671F. (I know, I’ve railed against idiotic naming conventions for consumer products in the past). It’s a 46″ LCD TV, 1080p, 120 Hz, HMDI 1.3 with built-in spicto-blango-color-correcting-carousel blah blah blah. Suffice it to say it was the top-of-the-line product from Samsung when it first came on the market in October (which of course makes it now hopelessly obsolete by the standards of the consumer electronics industry. It’s the second-highest rated TV in Consumer Reports after the Sony XBR4, but my wife Vicki didn’t approve of the floating glass bezel around that one so we settled for a (very close) second-best.

Side note: How do bricks-and-mortar retailers stay I in business? The MSRP on this is $3199, which until about last week was the price you had to pay at Best Buy, et al. Which means you are paying well in excess of $3500 with tax and delivery. Exactly WHO is buying from these dinosaurs? 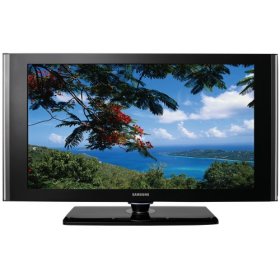 So, back to the story, this gorgeous piece of black-lacquered engineering arrived on December 7th, and the delivery company respectfully set up the whole thing for us on our credenza. My dirty hands wouldn’t even get a chance to lovingly fondle this apex of human achievement before it was hooked up and ready to start beaming pictures from god. But alas and alackaday! The cable company needs to install their nefarious cable cards to make it work with our new TivoHD! Three calls, three separate trips later (well, two—on one scheduled trip the week before Christmas, TimeWarner simply never showed up despite the window they gave me of 9 a.m.-7 p.m.; seriously, what other company in the world tells you they like your business so much that you have to wait around 10 hours for them to start their ritual monthly bilking of you–and then doesn’t even show up?) Ugh, I digress; finally, on December 31st, the gates of heaven were laid open and I assumed into pure liquid crystal display-loving bliss. The cable cards were installed and TimeWarner started delivering through their pipes a steaming load of hot product, served right to my living room. I giggled and cackled in glee the first time I saw high-definition in action, right there, about 8′ in front of the sofa. My wife, ever the sardonic one, turned to the cable installer and said “Does every guy do this when you hook up their HDTVs?” He chuckled and said HE does it himself every time he hooks someone up.

In the ensuing few weeks I have spent my time reloading our new Tivo with HD stations, and oohing and aahing over our new child. Sometimes I do wonder if there is a patron saint of television? At least with the coming economic apocalypse we’ll have something to keep us entertained.