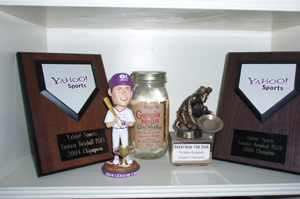 I tend to break my life-long love baseball into different eras:

And besides, after a couple years of struggling with the concept, I got the hang of the whole Fantasy Baseball thing.

It took me awhile to warm up to the idea — I’d resisted it for a long time, because I’m not much of a gamer — but with the way the neato internets do all of the mathematics and providing the real-time updates and interfaces, I soon fell for it. I actually think it was the decision the second year to change to Yahoo! and change the league to allow to make updates on a daily basis as opposed to a weekly basis.

Suddenly, I had a reason to pay attention every single day. Not for hours and hours every day, but just for a few minutes a day. Make sure that the right pitchers were in; making sure that everybody was actually playing that day (which has been weird this year because of all of the funky bad weather). Make sure that I don’t have the guy who hits .074 against lefties in instead of the guy who hits .426 against righties.

To paraphrase Woody Allen: 90% of Fantasy Baseball is just showing up. Paying attention. I have some other strategies, especially on Draft Day (one of the best days of the year), but I’ll keep those to myself for now. They are nothing earthshaking anyways; I’d get killed in one of those experts leagues.

You know what I like about it? It’s gives me a chance to make decisions about something that has absolutely no real-world consequence whatsoever. The worse that happens on a daily basis is that I put the wrong guy in; the worst that can possibly happen is that I could not finish first. Which hasn’t happened in, ahem, three years. (Oh come ON, y’all knew that I had to mention that at some point!) Just mentioning that fact might be construed as trash talk.

So I guess that I’m somewhat of a gamer. Fantasy Baseball, where I’m now up to managing three teams this year — all with different rules — and where I can only dream of a second baseman with numbers like Hank Aaron. Which I’m guessing is going to happen sooner than the Giants winning the World Series.