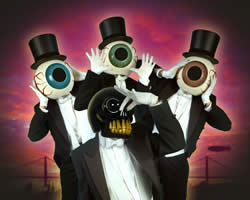 Very few bands survive 35 years in the music business without undergoing major changes. Guitarists drown, drummers spontaneously combust, and singers generally get old and cranky. There’s no telling what might happen once rock stars get to be a certain age. Fortunately, the Residents aren’t most aging rockers.

As bands go, the Residents haven’t changed much over the years. True, one of them lost an eye back in the mid-80s, but other than that they look about the same as they did when they released Meet the Residents back in 1974.

I can almost hear Jim saying:

“That’s because no one has ever seen the Residents or has a clue who they actually are. For all we know Thomas Pynchon is a Resident!”

True. But that was all part of the plan. And 35 years later it’s starting to look like a brilliant plan.

In this era of tabloid news and paparazzi car chases it’s almost unfathomable to think that anyone would start a band with the idea of intentionally adhering to a strict code of anonymity. The fact that the identity of the Residents remains unknown after all these years is all the more unreal when you consider that the band are true new media pioneers. How is it possible that a band can be so media savvy while remaining completely anonymous?

The Residents began working with video before they began making music. Prior to Meet The Residents, the group spent several years working on the still unreleased feature film Vileness Fats. While not much ever became of Vileness Fats the group’s video experimentations resulted in some of the earliest music videos. As strange as it seems today, the Residents were regulars on MTV in the early years. If for no other reason because they had produced more videos than anyone else at that point in time. It also helped that quite a few of their videos were exactly one minute long.

The Residents arguably invented the mash-up back in 1976. Third Reich and Roll remixed and recontextualized the history of rock music while portraying Dick Clark as a fascist dictator. The video featured an army of steaks pounding a swastika into submission. All part of the Resident’s long tradition of subverting cultural icons.

The Residents live performances have been sporadic, but legendary. The shows tend to be more performance art than concert and usually involve elaborate sets and large casts of extras. The bands history is full of harrowing tales of concert related disasters. You think Spinal Tap had a hard time, try touring with an eyeball on your head.

Historically, one of THE RESIDENTS’ primary obsessions has been the creation of alternative worlds.
— Vileness Fats entry on Residents.com

Which brings us to the CD-ROM titles the group produced in the mid-90’s. I hesitate to call them games, because they weren’t. Freak Show and Bad Day on the Midway were more like virtual reality environments that brought the albums of the same names to life on a computer sized screen. While other music related CD-ROM titles of that era were lame at best, the Resident’s
were addictive and strange.

Along the way the Residents have made some music too. Nearly 60 albums in the course of their career, and there’s every indication that many more are on the way.

The Resident’s latest project, River Of Crime, is a serialized radio drama presented in five parts. As you might expect you can buy River Of Crime from iTunes, but you can also buy a special collectors edition online from The Ideal Copy or at any Virgin Megastore. I mention the product because I think it represents yet another milestone. This has to be the first time anyone has ever released a professionally packaged CD containing two blank disks. Buyers get a special code that can be used to download the five episodes along with bonus tracks. The idea is that you’re supposed to wait for all five episodes to run, then burn them to the CD’s. River Of Crime takes DIY to a whole new level.

Later this year the Residents will release an album called Tweedles and after that, who knows. Most likely it will involve a strange mixture of media types in a way we hadn’t previously considered. If ever there was a band that understands the promise of convergent media it’s the Residents.