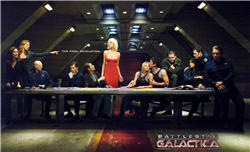 By “Fan Quality,” I don’t mean that they are better people — though, obviously Battlestar fans are fully awesome, duh — but rather the intensity that fans possess for a particular piece of content. The more intensity, the higher the Fan Quality.

With Battlestar, the level of intensity is pretty high, so all parties involved know that there is an opportunity to give these fans more, and as long as the perception from the fans is that the new content continues to deliver what the old content did, this can go on for quite some time.

That’s always the assumption, BTW — that the creators continue to deliver the goods. If not, then watch out below: an ongoing crapfest like, say, Enterprise can destroy decades worth of good will in a single retconned series arc.

But once a high level of Fan Quality is established, it never fully goes away. In fact, this is what keeps musicians like Neil Young, Sonic Youth, Robyn Hitchcock and others going through long and varied careers: the fact that they have an established fanbase who are going to at least consider purchasing every single new release — even if they didn’t particularly like the last couple.

Which is great and all, but how can you tell that, for example, a TV show has a high Fan Quality?

Just go online, and start looking: if the buzz surrounding a piece of content is hugely disproportionate to the actual numbers attributed to that piece of content, it has a high Fan Quality.

Are there loads of reviews for it? Are there newspaper, magazine and online journal articles about it? Are there websites and continually updated wikis dedicated to it? Is there a ton of discussion going on about it?

A high Fan Quality isn’t going to mean that it’s a hit, but the disproportionate level of coverage does mean that the masses are going to have to actively ignore it, instead of never even hearing of it.

For example, while even hardcore fans of Mad Men might be sick of the endless parade of articles and blog posts about it this year, that buzz is also a signal that there is a core, loyal audience there. Mad Men has a high Fan Quality.

On the other hand, the relative lack of buzz surrounding a show like The Middleman has those of us who think that it’s best new thing we’re going to see all year assuming that it’s done after next week’s episode. The Middleman, sadly enough, has a low Fan Quality.

The problem, of course, with this theory is that Fan Quality is not as yet quantifiable. There isn’t a specific numeric threshold of buzz that is the tipping point from low Fan Quality to high Fan Quality. Currently, it’s like Justice Potter Stewart’s famous definition of pornography: I know it when I see it.

And in the case of Battlestar Galactica, I totally see it.