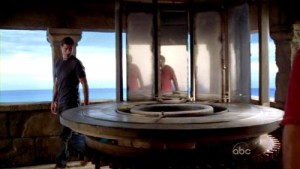 After a couple of mythology-heavy episodes, I thought I would check back in and take a look if there was any movement on my LOST theory.

As you’ve no doubt noticed, things are moving pretty slowly in that regard. You might have noticed people (many of whom waited patiently for the reveal of BSG’s Final Cylon) are whinging about it, even though we have hours and hours to go. Chill out, already, cos you’re missing all of the other cool shit that’s happening!

Because things are moving, and so far nothing contradicts my original theory, and in fact, I’ll even go so far as to say that this week’s Jack-centric ep actually supports it.

Once again, here’s my theory in a nutshell:
The two timelines are going to start “bleeding” into each other, and the closer someone was to the epicenter of the hydrogen bomb Juliet set off, the faster that they are going to realize that they exist in parallel realities.

Addendum: While everybody theoretically exists in both timelines, only those people who were alive and there during the 1977 nuking will be able to experience both timelines: Juliet, Jack, Kate, Sawyer, Hugo, Miles, and Jin. Not Sayid, because he’s dead now, like Juliet. NOT Claire, because she wasn’t ever in 1977.

Right. So this week, not only did Jack have confusion on when his appendectomy was, he saw not just himself in multiple mirrors, representing his existence in multiple timelines. And, if that wasn’t enough he also saw a significant piece of his life — the house he grew up in — reflected in those mirrors.

This was obviously what Jacob was going for, and means that Jacob may — probably does — have something to do with the multiple timelines. In any event, I think that Jack — both Jacks (all Jacks!) — is feeling utterly dislocated from who he (they) think(s) they once was (were).

The question is, will Jack figure out that what he saw was a reflection of the sideways ‘verse, as opposed to his past. I’m thinking that he just might. Assuming, of course, that it is.

In the meantime, while everybody is concentrating all of the yummy Craphole Island mythology, I think that I’ve realized something about the 2004 Sideways universe: things are better.

Er, not things, so much, but the 815ers are. Sure, life is tough — Locke is still a cripple, Jack still has daddy issues — but the way the Sideways people are dealing with the toughness is different.

It’s almost as if they’ve had three years of a much worse experience in order to simultaneously toughen them up and give them a much-needed perspective on their everyday lives. Because they have.

How this all works, I can’t say for sure — perhaps a cross-dimensional psychic version of bittorrent? — but anybody who crashed on the Island in 2004 somehow carries those experiences with them in the the Sideways universe. Even if they died in the interim. And those experiences have made them better people.

That’s the point of the sideways universe: it’s more about showing us how these characters have grown than it is about plot. Until the bleeding happens in a way that makes it about plot. And that’s already happening.