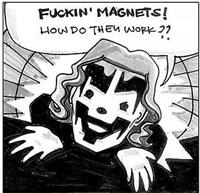 Previously, on The Key to Season 6 of LOST

I had a theory, which was mine, and it was all about the relationship of what the show was calling the “sideways” timeline to the “real” timeline. I hadn’t posted in quite a few weeks, because I wanted to see how my theory played out before I declared victory or defeat.

I am now ready to do so, but first, let’s restate my original theory:

The two timelines are going to start “bleeding” into each other, and the closer someone was to the epicenter of the hydrogen bomb Juliet set off, the faster that they are going to realize that they exist in parallel realities.

While everybody theoretically exists in both timelines, only those people who were alive and there during the 1977 nuking will be able to experience both timelines: Juliet, Jack, Kate, Sawyer, Hugo, Miles, and Jin. Not Sayid, because he’s dead now, like Juliet. NOT Claire, because she wasn’t ever in 1977.

Well, it just goes to show how wrong you can be.

The only part of my theory which hasn’t been totally discredited is that the timelines are going to start bleeding into each other. Which wasn’t exactly an original thought, and in fact an obvious thought to anybody who’s read/watched a lot of sci-fi.

All of this, of course, hasn’t stopped me from coming up with another theory, which is this:

Being tossed down that well by Flocke just sealed it. It’s just like Gandalf facing down the Balrog at Bridge of Khazad-dûm, and tumbling into the abyss to eventually die before returning to lead the battle against Sauron. It’s just like Starbuck flying into that storm only to return to lead the Fleet to Earth, in order to see her own charred corpse.

OK, not JUST like those things, but close enough. For one thing, I’m not sure that Desmond is going to die and be “sent back.” In fact, if the well is truly full of electromagnetism, he may not even make it to the bottom, but instead be dissolved into the white light and end up . . . wherever he damn well chooses.

I think that Desmond will emerge from being tossed down the well far more powerful. In fact, I’m going to guess that being tossed into a crazy pocket of unfathomable magnetic properties is going to be the thing that will help him harness his power.

And it won’t even matter if Desmond knows how fucking magnets work. Just that they do.

Because instead of being out of his control — as it has been this whole time — Desmond’s time-traveling and universe hopping will be very much in his control.

Beyond the grand themes of Science vs. Faith and Free Will vs. Destiny, LOST has always been about how all of these people are connected in ways that they don’t even know: I’m guessing that at least part of what Desmond is going to do from here on out is help them find out just how connected they are.