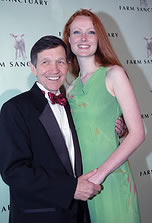 Ironically, while Second Life is all about real-time interaction, it also happens to be one of the smallest social networks. While it’s true that Linden has over 9 million users, the number of active Second Life users is substantially smaller. The world regularly peaks at around 50,000 concurrent users. That may sound like a lot, but it’s a fraction of the number of concurrent users served by sites like YouTube and Facebook — sites that aren’t nearly as dependent on real-time interaction.

Consider the resources required to staff a virtual campaign headquarters 24×7 just to maximize the user experience for a couple of hundred visitors who might stop by your location, and it’s easy to see that a campaign with limited funds is probably better off spending its time and money on other new media options. It’s no wonder that a group of new media experts from both parties recently expressed skepticism about the usefulness of Second Life as a campaign tool.

As the recent Newt Gingrich event proved, there is an opportunity for staging real-world political events in Second Life. However, they have to be carefully planned events that facilitate interaction, rather than simply open-ended installations that point users back to the web. The challenge, of course, is that candidates are too busy running for president to spend an hour or two in Second Life.

In retrospect, we should have known that Newt wouldn’t be running for president the moment he teleported onto the steps of Capitol Hill.

To be fair, the Kucinich campaign seems to be doing well on other social media sites. YouTube, in particular, works well for this candidate — especially videos that include his wife, and he seems to be making good use of both Facebook and MySpace. There are also quite a few photos of the candidate in action on Flickr. However, the campaign could probably do more to encourage supporters to submit photos from various stops around the country (the last update was August 29th).

Meanwhile, the campaign falls flat on other social media platforms. There are still no entries on the Kucinich blog, and while he has a twitter account, he still hasn’t posted anything. That’s fine. I don’t necessarily want a presidential candidate to be sending tweets from the campaign trail, but, as others have noted, these half-hearted efforts make it seem like the campaign simply went through a new media checklist, dutifully checking off every popular social media platform once the account was created.

It’s surprising to see such a progressive candidate take such a conventional approach to new media. 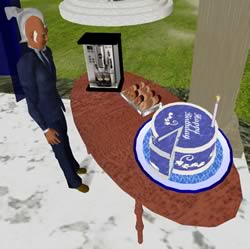 Having said all of this, I should note that the Kucinich campaign did hold an event in Second Life earlier this week. Monday morning, I received an IM inviting me to a cake party to celebrate the candidate’s 61st birthday.

I avoid cake parties in real life; there’s not a chance in hell that I’m going to a virtual cake party. Besides, I know that there’s always something left over after the party. I was not disappointed when I dropped by the Kucinich HQ on Sunday. I was greeted by a platter of donuts and a birthday cake, looking virtually untouched.

Something tells me Second Life isn’t really the future of American politics.