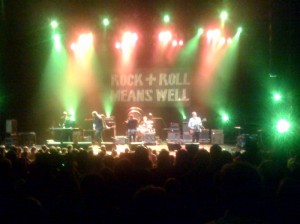 “Rock & roll means well, but it can’t help telling young boys lies.” That’s the line. I was one of those young boys who got lied to. Who desperately believed each and every one. The lies started thirty years ago, and they’ve never really stopped.

And last night at the Wiltern Theatre in the heart of a rainy Los Angeles, they were being told again in a way that I haven’t seen in years, as The Hold Steady and Drive-by Truckers put on one of the best rock shows that I have ever ever seen in my entire life.

These days, that may or may not be saying much: I don’t get out to concerts that much anymore; not like in the early 1980’s and Tim and I would see everything that came to Fresno, as well as road trip after road trip to catch the bands that wouldn’t even bother with Fresno. Not like in the early 1990s, when I was plugged into the local scene, and Don would let me into the Blue whenever he worked the door. Dozens, hundreds, maybe even a thousand live shows, in venues ranging from the L.A. Coliseum to the dingiest dankest club possibly imaginable.

And last night’s was as good as any that I’ve ever seen. Or at least that’s the lie I was told last night.

I hadn’t planned on reviewing the show, so I can’t give you stats or setlists or stories. You can probably find all of that elsewhere; all I can tell you was that the Drive-by Truckers knocked it out of the park, and I would have been satisfied right then and there: money’s worth and then some. Patterson Hood is ferocious onstage, and whether leading his band down “The Righteous Path” or getting into the head of an Iraq War vet in “The Man I Shot,” the guy is some kind of warrior. Which is perfectly contrasted by Mike Cooley — the man responsible for observing the truth about the lie — and his baby-faced old-man baritone.

But they were just the opening act.

Tough. There was a moment last night where they came out of a roaring version “The Swish,” which is probably my favorite song this decade, and went directly into “Magazines,” and it was like I’d never ever heard rock & roll before in my entire life. I was starting over: I was 15 and discovering The Clash, I was 25 and the Replacements were saving my life. I was NOT 35 and getting sick of the hassle of going to shows; and I sure as shit wasn’t 45, knowing how much planning it took just to get to the show and how much it was going to take out of me the next day.

It’s a lie. It’s all a lie. Rock & Roll does not mean well. It’s mean, and it’s dirty and it’s nasty and it lies lies lies. It lied to me when I was younger, and led me in the wrong direction so many times and in so many ways. Saved by rock & roll? Hell, my life was almost ruined by rock & roll! Almost. But not quite. And yet, it comes right back with its lies. Rock & roll lies to everyone, including middle-aged men. Especially middle-aged men who have their best life ever right now. Get thee gone, Satan!

And I think that The Hold Steady and Drive-by Truckers know this somehow. That’s why Southern Rock Opera was so powerful. That’s why Craig Finn’s rotating cast of Minneapolis fuck-ups resonate so deeply. These bands know the lie; but they live the lie because it’s so much godsdammed fun.

That’s why when — at the end of the all-hands-on-deck encore of “Killer Parties — Craig Finn went into his “there is so much joy in what we do” spiel, it didn’t seem fake or forced, or even a lie. It was real real real. And that entire show was such the type of rock show I love, and such the type of rock show that I just don’t ever get to see on any kind of regular basis, that I practically teared up, because I’ve always believed the lie.

And I guess I always will. At least as long as bands like The Hold Steady and Drive-by Truckers are around to tell it.