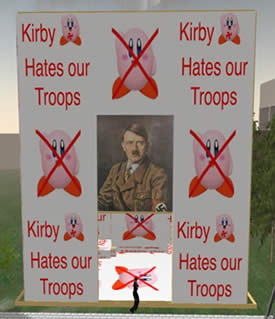 As political scandals go, this one was an odd, even by Second Life standards. Gaming blogs were buzzing last week with reports of a bizarre incident involving the staff member of a U.S. Senator who (allegedly in a drunken rage) used a plot of land in Second Life to build an offensive display of protest against a fluffy pink video game character known as Kirby.

Early accounts of the incident raised more questions than they answered. An SLNN story failed to reveal the identity of the Senator, offered only the slightest of reasons why someone would hate Kirby enough to portray him as a Sieg-Heiling Nazi who “hates our troops,” and raised the possibility that our national security might be at stake as a result of the Senate staffer leaving passwords posted on his computer monitor.

When mainstream political pundits grouse about the risks of swimming too far into the deep end of the new media pool, I’m pretty sure this is exactly the scenario they have in mind.

After re-reading the SLNN story a half dozen times, the mystery surrounding the identity of the Senator and his staffer became too much for me to bear. I’m sorry to report that I’ve spent most of the past week tracking down the participants in this absurd tale; and untangling a web of accusations, lies, and deceptions.

Now the whole story can be told.

A Lesson on Honorifics

My first task was to figure out the identity of the Senator. Also, how the hell a U.S. politician managed to slip into Second Life without creating a storm of media coverage. I’ve been hearing rumblings that the media has finally finished with the hype phase of its Second Life coverage, and is now moving into the backlash phase. Still, it seems like a real live Senator in Second Life should generate some sort of news coverage.

To my surprise, several sources revealed the Senator to be none other than Mike Gravel. While Gravel is an active presidential candidate, he hasn’t held a seat in the U.S. Senate for over 20 years, and it’s highly unlikely that his campaign volunteers have access to any sensitive information that would compromise national security. I would hope that everyone writing about the 2008 presidential campaign understands that, in Mr. Gravel’s case, the word Senator is used as an honorific.

The Gravel revelation was also surprising because the protest was alleged to have taken place on land where the candidate’s staff member was building a virtual campaign headquarters. But the Gravel campaign already has a well established virtual campaign HQ. As I eventually discovered, the Kirby incident had nothing to do with Mike Gravel’s campaign.

A Lego and a Dream

Legoean Ferraris (aka Lego) is a volunteer for Gravel’s presidential campaign — both in real life and in Second Life. I’m still not clear on what Lego’s real-life responsibilities are, but in Second Life, he’s not exactly what you’d call a high ranking campaign official. He doesn’t seem to have any duties in the day-to-day operations of the in-world campaign.

Lego has only been in Second Life a little over a month. In that short time, he’s already developed a concept for a consulting business designed to help Congressional candidates build and maintain virtual campaign headquarters. In some ways, Lego is like nearly everyone you meet in Second Life. He’s convinced that virtual worlds are the future, and he dreams of running a successful virtual business.

The first step in Lego’s business plan was to buy a plot of land where he could build an office for his new venture. Lego purchased a small parcel in a business district named Bastiat. Shortly after that, things began to go horribly wrong. 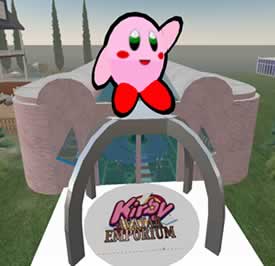 Not long after arriving in Bastiat, a store called the Kirby Emporium opened across the street from Lego’s new office. For those of you who don’t know, Kirby is possibly the most innocent video game character ever created. He was originally developed as a learning tool for novice gamers and was designed to be as inoffensive as possible. Kirby’s special power is the ability to inhale his opponents and spit them out as stars.

Lego began having problems with the Kirby Emporium when the store erected a giant spinning Kirby sign. Somehow Lego felt that Kirby’s goofy presence would damage his business prospects. Apparently, Lego isn’t aware of just how bad Bad Neighbors can be in Second Life.

Lego’s reaction to the Kirby Emporium seems to be part of an ongoing trend I’ve noticed among politically active residents in-world. Despite (or maybe because of) the naturally anarchistic nature of Second Life, political groups in SL are obsessed with being taken seriously. I can only imagine that Lego had nightmares about meetings with potential clients who wanted to know why there was an enormous spinning pink puffball across the street from his consulting office. Still, any consultant who attempts to portray Second Life as something other than what it really is isn’t doing his clients any favors.

Lego eventually took his complaints to IntLibber Brautigan, the owner of the region. Lego demand that IntLibber repurchase the land. Not only did IntLibber refuse to buy the land, but he also took offense at Lego’s complaints, calling Lego “a racist.” IntLibber believed that Lego’s distaste for Kirby was racially motivated.

Does Kirby Hate Our Troops?

After IntLibber rejected Lego’s demands, Lego attempted to unload his virtual land at a substantial discount. A week later, the land hadn’t sold, and Lego was seeing spinning Kirbys in his sleep.

Then Lego got the bright idea to use his land to build a weird monument protesting Kirby. He constructed a huge house-like building made of signs depicting Kirby as a little pink nazi, raising an arm in salute to Adolph Hitler. The pictures I’ve seen are a bit fuzzy, but Kirby looks to have a little red swastika on his chest. Over Kirby’s head, the signs read, “Kirby Hates our Troops.”

Some have suggested that Lego’s protest was merely absurd and was an attempt to make light of the ridiculous situation he found himself in. Maybe so, but I find it unfathomable how anyone involved in real-world politics could ever think that portraying a beloved video game character as a nazi is a good idea.

Lego briefly tried to coverup his involvement in the protest, claiming that a house guest had accessed his computer and built the signs using his account. As excuses go, it was just one step removed from “the dog ate my homework.”

It was only a matter of time before Lego’s protest was discovered by IntLibber, who promptly contacted Linden Lab to report the display of “broadly offensive material.” As owner of the region, IntLibber also confiscated Lego’s land in the process. If nothing else, Lego succeeded in ridding himself of his problem land — at a 100% loss.

When I talked with IntLibber this past week, he was still playing the race card. During our interview, he told me, “I have to say that while some people in RL may think this is an oddball comedic story, replace “Kirby” with “African American,” and the story becomes far more clear.”

I’m not sure what to make of IntLibber’s comments. It’s uncommon to hear a self-described Libertarian, and former Reagan Youth, speak so passionately about the plight of an oppressed group. If I were the skeptical sort, I might think he was exploiting the situation for maximum media exposure.

So, What Race Is Kirby?

If Lego’s hatred of Kirby was racially motivated, we might better understand his hatred if we knew what race Kirby is. Unfortunately, according to Wikipedia, Kirby doesn’t have a race:

Kirby’s species has been a common topic of debate in his fandom. Unlike many other video game mascots, such as Link being Hylian, Kirby’s kind has never been given an official name.

Still, IntLibber insists that Lego’s protest constituted a “hate crime.” During an interview IntLibber told me:

I would call it a hate crime, as much as burning a cross on someone’s lawn … he didn’t regard the Kirbys as people of any equal importance. That’s the root of any bigotry.

I’m still not sold on the bigotry angle. While the use of Nazi imagery is certainly “broadly offensive,” I’m not convinced that Lego’s hatred of Kirby can be equated with hating real people. It’s more like hating a pink ball of lint. 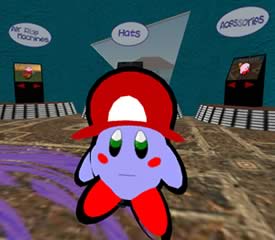 If Lego really wanted to take down the Kirby Emporium, he might have had better luck contacting the Nintendo legal department. There’s no indication that any of the Kirby merchandise being sold in Second Life is authorized or licensed by Nintendo.

I raised this issue with IntLibber and suggested that, as a silent partner, he might want to take a closer look at copyright issues. In response, IntLibber asked if I was threatening him, then informed me that Disney is the only company that really cares about enforcing its copyrights.

While IntLibber might be a Second Life business mogul, he’s got a lot to learn about how real-life entertainment corporations protect their intellectual property rights.

This aspect of the story raises another interesting hypothetical question. Is it possible to commit a hate crime against a copyright violation? Only the RIAA knows for sure.

The Rest of the Story

One aspect of this story that’s been overlooked is IntLibber’s silent partnership with the Kirby Emporium. I’m not suggesting that this justifies what occurred, but it might explain his reaction to Lego’s complaints, and it certainly could explain IntLibber’s over the top claims in the media. Lego’s protest has turned into a huge promotional event for the Kirby Emporium.

IntLibber’s grandstanding could also be politically motivated. While he denies involvement with any of the Second Life campaign groups, he recently named one of his islands Ron Paul, and he will apparently be donating a portion of that island for use by the Ron Paul campaign group. It’s entirely possible there might be some Paul vs. Gravel rivalry fueling the battle between Lego and IntLibber.

There’s also the issue of Lego’s land that was confiscated by IntLibber. IntLibber got the land back at no cost, and he gets to sell it all over again at a 100% profit. Despite IntLibber’s outrage, this whole incident has worked out pretty well for him.

Meanwhile, Lego still has plans to launch his consulting business, only this time from a private island. It’s doubtful that this incident will have any impact on his business, if for no other reason because his target market is blissfully ignorant of events that occur in Second Life.

While Lego lost a few hundred dollars on his virtual land, he might have fared much worse if the story had reached a broader audience in the mainstream media. All things considered, Lego got off easy on this one.

A truism of American politics is that the cover-up is often worse than the crime. In the case of the Kirby scandal, it’s hard to tell which was worse, but one thing is certain, both were equally absurd.