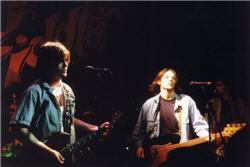 I started the ’90s making mix tapes and finished it by ripping mp3z. In the meantime, I’d pretty much replaced my entire vinyl collection with CDs, thanks to the Columbia Record Club, the BMG Record Club and the explosion of stores like Ragin’ in Fresno and Amoeba in Berkeley that had vast quantities of used CDs to buy and trade for.

It was also the decade where I once and for all got overwhelmed by new music: there was so much access to so much music and the time to listen to all of it had contracted so much that I feel much more confident about the early part of the decade than I do about the end part. That may be a natural thing: after all, by the time the 1990s ended, my 20s were long long gone.

So when I say that the best year for recorded music in my lifetime was 1991, please realize that I was probably in the exact right time and place for that to happen. Of course, 1991 was also a transitional year: not just the year of Nevermind and Achtung Baby! and Girlfriend and Use Your Illusion, but the moment when “indie” became a career choice instead of something that happened naturally.

So while I stood up and cheered when Nevermind took over the world, in retrospect, it was also kinda the end of the world. The one that I’d been in the middle of, that is. Maybe — probably, really — that would have happened no matter what: my life changed for good when I left Fresno in mid-1994. The upshot of all of this is that first half of the ’90s dominates my personal list, with albums from the years 1990 – 1994 making up nearly 80% of my top 50.

A note on reissues: Basically, if a reissue covers a specific recording date — or contained within a single decade — , then for the purposes of this project, it will be rated against that date. So Dylan’s “Royal Albert Hall” concert will be part of my 60’s list. However, if a reissue crosses multiple decades, then I rated it for when it came out, so James Brown’s Star Time is part of my 90s list. Trust me, I’m not wild about this, either.