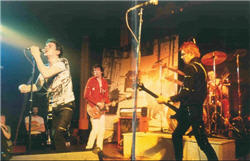 To me, the 1970s is the canon. Because it’s the decade where I became a music lover as a way of defining who I was, but — until the very end — was mostly about catching up with the past, it feels different from the 1960s (ancient Boomer history) or the 1980s (when I was fully immersed).

So unlike my previous lists for the 1980s, 1990s and (especially) the 2000s, maybe I hold some of this music in awe, because it already existed and was just sitting out there for me to discover. And discover I did. When I was 14-15, a central focus of my life was riding my bike to Tower Records and spending $15 on two records — Love Gun and Foghat Live; Rocket to Russia and Marquee Moon; Who’s next and Aqualung — and listening to those records over and over and over and over. Oh, and over.

Good ones, bad ones, it didn’t matter. It was all about figuring out what I liked, and by extension, who I was. Or maybe the other way around. It was sitting in my room and determining that I loved Quadrophenia but not Tales From Topographic Oceans or that I loved Close to the Edge but not Who Are You.

Then, in 1978 (a year too late) (but still too early for Fresno): punk rock. I’d been resisting — it just seemed like fashion-oriented noise nonsense — but spurred on by that first Cars album and Creem magazine, I took the plunge. Ramones. Television. The Jam. The Clash. Talking Heads. The Sex Pistols. And a host of lesser new wave and power pop and whathaveyou bands. The world was changing, I was on the ground floor, and it was thrilling.

I was with Neil Young: punk rock was the latest extension of the tradition, not a break from it. And I’ve operated that way ever since, as you’ll see from the following list.

And, of course, any similiarities between the following list and the actual best albums of the 1970s is strictly coincidental.

MORE READING ON THESE SUBJECTS