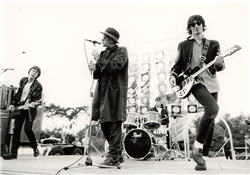 Ah, the 1980s. So maligned. But not by me. It is, of course, a truism that we’re never as connected to any music as the music that gets to us in our 20s, and so it is here: I spent the bulk of my 20s in the 80s, and while the decade itself almost killed me, it was the music here that totally saved me.

It’s no use trying to write a big long essay defending the 80s, except to say that after punk rock came along and blew everything up, one of the biggest questions was “OK, now what?” These records are what I consider to be the answer to that question.

So if you ever heard my radio show back in the day, you aren’t going to surprised by the albums listed here, even two decades down the road: I love what I love, you know? And this music was the soundtrack of my life like no other music from any other decade will ever be. It was all around all of the time: during loving and hating and playing and working and laughing and crying. It was everything all of the time. This music was part of me in a way that I’ll never even be able to fully explain.

That said, I’m hoping that the albums I loved, and the songs that I’m recommending and (especially) the essays I’ve written about these albums at least partially explains why I think the 80s were perpetually underrated, even at the time.

A note about the annotation. I’ve written a lot about some of these albums over the years: formal reviews, blog posts, forum comments, etc. but I tried to say something new from my 2010 perspective. And in keeping in that spirit, you’ll notice a number in brackets for many of the entries. That number is my original ranking of that album from back in December, 1989, when I did my very first “Best of the 1980s” list.

(Unlike the other decades, any similarities between the albums listed here and the actual greatest albums of the 1980s is purely intentional.)

A note on reissues: Basically, if a reissue covers a specific recording date — or contained within a single decade — , then for the purposes of this project, it will be rated against that date. So Dylan’s “Royal Albert Hall” concert will be part of my 60’s list. However, if a reissue crosses multiple decades, then I rated it for when it came out, so Dylan’s Biograph is part of this list. That said, I made exceptions for some key best-ofs that came out in the 1990s but covered bands that were influential in the 1980s: Joy Division, Run-DMC and The Specials. Arbitrary? You betcha!!

MORE OF THIS CRAZY SHIT