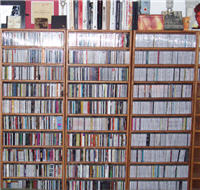 As it turns out, my 45-year-old self is facing a dilemma that may have worried those younger versions, but not for very long. You see, sometime in the past decade, I passed a tipping point: I have accumulated more music than I could ever possibly listen to. If I’m lucky, I’ve got another 30 years left to listen to music. If I’m lucky.

One solution is to stop and take stock, like Noel Murray of the A.V. Club, who is taking 2008 off from new music to weed out his collection.

I’ve thought about that: but what happens next year when the next Hold Steady album comes out? Or if R.E.M. put out their best album in years? Or if U2 or Paul Westerberg or Jack White or Drive-by Truckers or Jeff Tweedy put out new records? What happens if Rhino finally does remastered Hüsker Dü or Smiths box sets? How about The Bootleg Series Volume 8: The Genuine Basement Tapes.

What happens if 2008 is the year that Neil Young finally decides to put out Archives?!?!??

I can’t even imagine not cheating on such a pledge.

Besides, I’ve been taking stock all along: I spent much of the 1980s and 1990s making mix tapes and artist best-of CDs, and now I have folders with the best songs of the previous months. I spend a lot of time figuring out what songs I might want to listen to in the future.

Now that I think about it, I’ve always spent a disproportionate amount of time planning for what I might be listening to in the future. Which, of course, cuts into the amount of time I have to digest new music.

Said time has been steadily decreasing at pretty close to the same rate that the amount of new music has been entering my life. Eventually, I will have an infinite amount of music, and no time whatsoever to listen to any of it. Perfect!!

The other thing, of course, is that I no longer listen to music in the same way. Albums have become collections of new songs by a particular artist instead of pieces of art in and of themselves. Directories in a hard drive.

Out of sheer momentum, and because I’m honoring my younger version who really thought I could be a rock critic — and was very happy when I got into the Village Voice’s Pazz & Jop poll back in 1994 — I still make year-end best-of lists (and vote in a few polls), but every year I feel a bit more like a fraud. With everything becoming fodder for the iPod or Squeezebox — both of which are on eternal randomization — I barely listen to albums as albums anymore.

Instead, I wait for multiple songs from a single directory to jump out at me from the mix. It’s hardly democratic: of course I’m going to pay more attention to the new Radiohead or Neil Young or Bruce Springsteen or that Robyn Hitchcock outtakes collection than Pitchfork’s latest buzz band — unless, of course, that buzz band suddenly starts kicking my ass.

This is a radical shift to how I’ve listened to music in the past, which had always primarily been as an endless sequence of album after album after album after album. Obviously, that’s now how we roll here in the 21st Century: instead, we’re all creating our personal private mix tape/radio stations. Whether that’s a good or bad thing is beyond the scope of this post (not that I actually know what the scope of this post even is anymore), but I still think about music coming to me in the form of albums even though I really don’t really experience it that way anymore.

Does this all sound confusing? I think that it is. It isn’t just the music industry going through a technologically-induced sea change, it’s music fans. Noone really knows what it’s all going to be like in the next 5 years: not as an artist, not as a label, and most certainly not as a fan.

Which is why that stopping and taking stock seems so appealing (and it would, of course, be more appealing if it was part of my job), and I will be interested in seeing how Noel’s experiment plays out. But I also wonder if there is an endpoint to when I will care about adding new music to my life, and am not sure that I want to artificially induce that endpoint. My guess is that it will happen at some point in the next few years in the next 10 before I die.