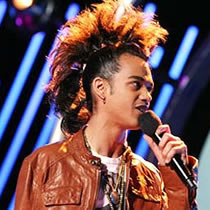 What does that mean in English? Good question.

See if you can remember the first time you ever heard of these people:

It’s entirely possible that you can’t. Unless your life was utterly transformed the first you encountered these people or they instantly fell into your Anti-Christ wheelhouse, you probably didn’t think much of them at all. That’s the way it usually works: a show or a movie or a musician hits the top of the charts for a couple of weeks and then goes away, never even crossing the paths of most of the audience.

Recently, new records by indie rock-associated bands — Arcade Fire, Modest Mouse, The Shins — have debuted at the very top of the Billboard charts. Does anybody truly believe that means that indie rock is making a huge dent in the overall popular consciousness? No, it’s just that particular audience niche (or collection of sub-niches), coming together at the same time to purchase a record that they’d already downloaded an advanced copy of and really like. The next week, these artists drop in the charts like stones.

Why? Because the rest of the audience doesn’t give a shit. They are indifferent to the band and its music. Overall, the band’s popularity is somewhere in the middle. Not enough people have heard of them to move their popularity up or down.

However, if one of these bands somehow stuck around at the top of the charts for a few weeks, then they would start getting media coverage disproportionate to the actual number of records that they had sold. In extreme cases — you might remember Kurt Cobain and “grunge” — they are touted as harbingers of a new youth culture.

They aren’t: they’ve just crossed over slightly more than most.

But, of course, that’s happens when something stays “popular” on the charts: the media jumps on it. We start seeing it everywhere. We get sick of it. And the indifference that the rest of the audience had for that artist becomes hatred.

That’s when the backlash starts: not when current fans become former fans, but when overexposure causes the normal indifference of the mass audience to tip towards hatred.

As it turns out, far more people hate them than like them. They have become so “popular” that they are actually unpopular.

Which brings us to American Idol, which is, by sheer numbers of people, the most popular thing in America right now. It’s so dominant that TV critic Sir Tim Goodman calls it the Death Star, because it kills all of the other shows in its time slot. 30 million people watch it every week.

But, in a nation of 300 million, that means that 90% of us don’t watch it every week. I’m one of those 270 million, and yet I cannot escape it. Despite the fact I’ve never even seen an episode, I know all about it every single year.

I used to not care one way or another, but over the years, I’ve grown to hate it. And so do a lot of you.

But what’s so interesting about American Idol is that hatred can be translated into action. It can be hacked! By voting for Sanjaya, you actually harm American Idol. You make a mockery of everything it stands for. Because whatever else you might say about the winners of the show, they do have some singing talent. But Sanjaya: not so much.

Assuming the producers stay on the up and up — no guarantees, but as he goes deeper and deeper, they’ve got to be conflicted, because controversy is never bad for ratings — the American Idol haters could overwhelm the American Idol lovers and make him the winner.

It seems crazy, I know. But it’s so crazy, it just might work.