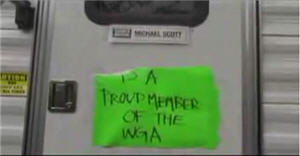 Remember a few months ago when NBC announced that they would air 30 half-hours of The Office? Here at ‘Loper HQ, where The Office runs neck-and-neck with Battlestar Galactica as our consensus favorite TV Show, there was much rejoicing at the anticipated bounty of hilarity and pathos that we were going to receive.

Well, not so much, as it turns out. Among the many many ironies created by the Writers strike is this: The Office is the first of the scripted prime-time shows to run out of of episodes, which means that this week’s episode is the last ep for, well — quite possibly, ever.

It’s actually quite symbolic that The Office is first scripted show to go. When it comes down to it, this is essentially a battle about the internet, and The Office is a show that has benefited from the internet in several ways: not only has it been a perennial iTunes favorite, and a show that has benefited from the amazing amount of literate discourse on TV you can find on the net these days, it’s also an object lesson on just how badly the studios are fucking with the writers.

I refer, of course, to the infamous “webisodes” starring several of the writer-actors that populate The Office, and for which they didn’t get paid any percentage of the ad money that NBC made from running it on their website.

Despite the fact that these webisodes won an Emmy for their content, NBC’s rationalization was that the Webisodes were promotional in nature, and not content. Which is such utter bullshit, that I actually kinda love the enlarged balls it took to come up that and stick with it.

Here’s the difference, NBC: people watch — and often love — the content, and we skip — and often hate — the promotions. Your promotions doesn’t stand on their own like the webisodes did, but rather annoy the fuck out of us by spoiling things that are going to happen in upcoming episodes.

So content is like “some money goes missing, and the accounting staff needs to figure out where it went.” Or, “Michael organizes board game Tuesdays in the lunch room and gets upset when Dwight beats him by putting hotels on Boardwalk and Park Place.” Here’s promotional: “Coming up in a very special The Office: Jim and Pam break up and the rest of Dunder-Mifflin deal with the fallout.” Of course, every single suit at NBC knows this. It’s just typical of the two-faced act that the studios have been engaged in: discounting the efforts while reaping the rewards.

No doubt this all contributed to the radicalization of writer/actors that make The Office so awesome in the first place, and it’s why they essentially shut down the production of the show for the duration of the strike.

This worries me a bit: The Office has never been a CSI-style hit with the masses in the same way it is with the Telescenti, and it’s entirely possible that NBC may react to their on-the-front-lines rebellion with a big, fat cancellation. Why? Because they can.

It’s a truism that the studios have all of the power in this situation. They could shut down the strike, right this second, by paying their writers fairly for internet content, and — oh yeah, give them a couple more cents — not dollars, but cents per DVD, too.

But you and I have power, too. We can refuse to watch reruns and scab shows. I will not watch anything NBC puts on in place of new episodes of The Office. I won’t watch the repeats, and I sure as shit won’t watch any reality, news, or game show that they put in its place.

But after this week, I’ve got a little bit more time to do anything else on the entire planet other than watch American network television.